For our third post in our series on the league’s history, we are diving into another piece of our history, starting with the 1940s. This era was integral for the league and its members invoking change that would have a lasting impact for our nation but also at home in Chicago and with the lives of young children and working women.

The 1940s decade was largely marked by the war nationwide, but even despite that hardship, Junior League members created a lasting impact at home in Chicago.  During World War II, the Junior League of Chicago played a major role in the war effort by chairing hundreds of war-related organizations.

With a key geographic location, Chicago played a visible role as a “crossroads” city, with tens of thousands of military personnel who were passing through the city—they would stop at Chicago Servicemen’s Centers; which Junior Leaguers helped staff and assist. In addition to that key war effort, League members participated in War relief with the American Red Cross, Illinois Council of Defense Servicemen’s Center, USO, and the Victory Book Campaign and Center.

While this decade was defined by WWII, for league members, the arts were not forgotten. The organization is responsible for starting the country’s first children’s theatre and worked with other leagues around the country to establish regional children’s theatre programs. Children’s health and safety also remained a top priority for these women: during the 1940s they helped support the Consultation Clinic for Epilepsy at the University of Illinois College of Medicine, and the Foster Homes for Convalescent Children Project, which was a collaborative effort between the JLC, the Chicago Orphan Asylum, Children’s Memorial Hospital, and Cook County Hospital. 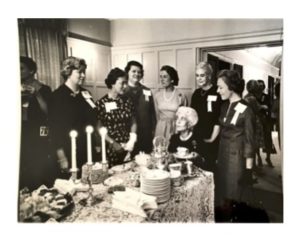 Stemming from that integral support of children’s health facilities, the league continued to be involved in health and wellness for children. In the 1950s they supported the newly opened Child Guidance Clinic at Children’s Memorial Hospital, one of the first pediatric psychiatry centers in the country – it was led by Dr. Henry H. Fineberg, and staffed by a psychiatrist, two psychologists, two social workers, and a speech therapist. Junior League members volunteered time as group leaders for things like “play therapy” with the children.

In 1954, the league held their first open house at their new headquarters on Astor Street!  The summer prior, active members voted to accept Lydia Thatcher Wheeler’s gift of her former house. The open house event in June 1954 was the first opportunity members were welcome to visit the new league headquarters–which still remains ‘home’ to the league today.

With the launch of WTTW  TV in 1955, the Junior League was on the ground floor, creating programming around children and parenting. The goal of this newfound network was to provide educational television content to the city. They helped do just that with their launch of a landmark WTTW TV series – “The Whys of Wise Parenthood.” Even today, WTTW remains steadfast in its continu

Moving onto the 1960s, there was a great focus on children and the arts in this decade with the league continuing suc

cessful endeavors and pioneering new ones!

Annually repeated efforts continued to be: children’s theater, Chicago symphony youth concerts, and art scholarships. During this time period, the new programs were created along those lines: Alongside the Women’s Board of the Art Institute, the league helped establish the first junior museums in the country! In doing so, they helped raise funds to support it, its additional professional staff, and to create new programs—like a docent program, where volunteers devoted countless hours and personal resources to facilitate audience engagement in knowledgeable, relevant, and sensitive ways. This was to help expand tour programs for school children and was a combined effort alongside the Museum Education Department. They also created coursework to help social workers and alleviate their often overburdened caseload. League members created the ‘Casework Aide Training Course’ during this time to supply participants with the fundamental skills in social work – this was in cooperation with the Volunteer Bureau of the Welfare Council of Metropolitan Chicago.

To help school children with their reading, the league developed the Junior Great Books Projects, which has now become a foundation to train teachers, publish engaging classroom materials and create educational programs to develop critical thinking skills, reflective thinking, and strengthen social and civic engagement. The initial ‘books project’ offered five boxed sets of paperback books for grades 5-9. Titles were developed from the adult program with excerpts from The Pilgrim’s Progress and Adventures of Huckleberry Finn, but with each new edition, the Junior Great Books program’s range of literature broadened to include more folktales, children’s classics, and respected contemporary works.