The primary focus of the Junior League is to train women for volunteer service and spark their interest in the social, economic, educational, civic, and cultural conditions of their community.  While we’ve taken a look back at various periods of the League’s history, that sentiment remained centerfold — and still does — throughout our next time period of review.

Throughout the era of 1970-2000, the League continued to give back to the City of Chicago and branched out even further to start new projects to meet unmet needs. 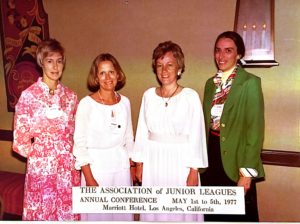 In the 1970s the Junior League of Chicago founded the Pioneer Gallery at the Chicago History Museum. The Pioneer was the first railroad locomotive to operate in the city and pulled the first train westbound out of town in 1848. It can still be seen today!

Helping English language learners was important throughout this era. Junior League members assisted with English lessons and job placement for women and worked in partnership with the Jane Addams Hull-House Association to spearhead the Lakeview Spanish Center Project where volunteers helped teach English as a second language.

Not only were JLC members volunteer teachers, but many were eager to speak publicly about current issues.  To address the rising concerns around environmental issues, the Environmental Speakers Bureau was established to train volunteers to educate schools and adult groups about the environment.

Crime and substance abuse prevention has been a focus of several JLC projects over the years, but during the 1970s the JLC took it a step further. They introduced the First Victim Witness Assistance Program, which served as a prototype for court improvements across the country. The Victim-Witness Assistance Projects helped over 30,000 people at two Chicago court locations and was even profiled in Time Magazine.

The arts continued to be a driving force for league members during these decades as well. The Mad Hatters Children Theatre Project continued to be a thriving success! And it still is today! In fact, at the JLC’s Annual Gala in 2022, we celebrated 100 years of service by the Mad Hatters.  This JLC group traveled to area schools, hospitals, and libraries to entertain children by acting out stories. In addition to theater, music was right beside it. During this era, League members founded The Music Appreciation Docent Course and presented an introductory course in music appreciation to school children for the Chicago Symphony Youth Concerts.

In the 1980s, the Junior League of Chicago introduced its first Signature Project. To this day the JLC continues to roll out signature issues of importance, and this all dates back to this decade. During the 80s, the Expressways Children’s Museum was the inaugural signature project. Today, this museum is known as the Chicago Children’s Museum at Navy Pier and it draws many in the Chicagoland area as well as visitors to the Windy City.

Numerous additional programs were developed at this time to tackle issues ranging from the emotional abuse of children to teen pregnancy to substance abuse.  A key sponsorship focus during this time was centered around health advertisements aimed at helping pregnant teenage girls by providing them assistance and connecting them with resources.

Baby at the Children’s Place, the first pediatric AIDS home in the Midwest, 1990s.

In the 1990s the JLC was the first non-profit organization to participate in Mayor Richard M. Daley’s School Adoption Program when they helped “adopt” Carpenter School.

Public health issues continued to be a strong theme of the JLC in the 90s as well.  In the 1990s the League founded Children’s Place, the first pediatric AIDS home in the Midwest as a response to an urgent issue at the time: babies were being orphaned or abandoned because of HIV/AIDS.  This organization is running today.