Human Trafficking doesn’t discriminate based on race, gender or geographical location. It happens everywhere, be it downtown Chicago, the wealthy suburbs, or the rural parts of the state. What does differ is the way in which victims of human trafficking are viewed and treated by law enforcement and the legal system.

Though Chicago makes up a large portion of Cook County, there are differences in the approaches that each jurisdiction takes to prevent Human Trafficking.

In the unincorporated areas of Cook County, sheriffs will not make arrests for solicitation–they see the women working as the victims.  The Sheriff’s Police’s Special Operations Unit is comprised of a number of specialized units including The Child Exploitation Unit which conducts investigations into individuals who attempt to abuse children utilizing digital media, child exploitation and child pornography, and reactive child sexual abuse.

By definition, any commercial act of sex involving a minor is in violation of federal anti-trafficking laws even if there is no force, it is fraud of coercion because minors cannot give consent. The Vice/Human Trafficking Unit of the Sheriff’s Police investigate prostitution on the street and online, and focus on both human trafficking and the trafficking of minors. The police who work in these units have specialized training and understand that men and women who are sex workers have a high likelihood of previous trauma and view the worker as the victim. These units focus on arresting and prosecuting the buyer and the trafficker rather than the victim. These units have similar resources to a non-profit organization to support victims. 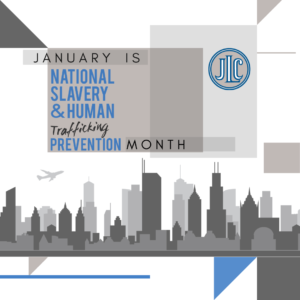 In the City of Chicago, however, the police do make arrests for solicitation. As a result, this makes it more difficult for non-profit organizations supporting the victims to build trust with the women they serve, and the victims are less likely to be cooperative when it comes to prosecution of buyers and traffickers.

The Chicago Police Department works in conjunction with the FBI, States Attorney Office and Salvation Army STOP-IT Program as part of The Cook County Human Trafficking Task Force funded by the U.S. Department of Justice’s Bureau of Justice Assistance and the Office for Victims of Crime to combat human trafficking by collaboration between law enforcement and social services. Ultimately, the Chicago Police Department has a lot of discretion when it comes to arrests, and the officers can either issue a ticket or make an arrest for a misdemeanor charge.

According to Kara Doan, Co-Founder and Chief Operating Officer of Restoration 61, the anti-human trafficking organization and Junior League of Chicago (JLC) community partner, has seen this first hand:

“Unfortunately, patrol officers don’t receive enough education about human trafficking. They may pick up a girl for prostitution and only after they identify she is a minor or in the trafficking system will they possibly reach out to the Special Victims Unit, but so many of these just get passed over and receive tickets or are arrested when they shouldn’t be the focus of the arrests.”

In Chicago, there is a disproportionate focus on the people selling sex rather than their traffickers or customers.   In a report published by the Chicago Alliance Against Sexual Exploitation, entitled “Policing and enforcing of prostitution laws in Chicago”, 6 solutions are given to improve Chicago police practices in regards to human trafficking.  They are as follows:

Currently, the punishment for buying sex is a city ticket, while those selling sex often face misdemeanor charges.

The Civilian Office for Police Accountability should develop an outreach campaign to potential victims of police sexual misconduct as it is the second most common form of police misconduct. Make victims aware of opportunities to submit complaints and seek justices for the harm against them without fear of retaliation

(4) Inform victims of police sexual misconduct about their options

(5) Stop arresting people for not having a state ID

Shockingly, Chicago is one of only four cities to have their own court system and misdemeanor diversion program to help deal with trafficking and prostitution. The Chicago Prostitution and Trafficking Intervention Court (CPTIC) was created based on best practice research throughout the country. The court allows those arrested for selling sex to avoid prosecution by completing their program and working with social service agencies. Unfortunately, not all who are arrested are given the opportunity to complete this program and therefore will oftentimes continue to be arrested. Kara Doan has worked with multiple women who had over 70 arrests before they started working together.

Ultimately, law enforcement and the courts have a long way to go in order to properly provide the those being trafficked with the services needed. Luckily Illinois is making strides to improve education of police officers and creating more courts dedicated to the cause.

During National Slavery and Human Trafficking Prevention Month in January, it’s essential that during these unprecedented times we continue to educate ourselves and remain aware that even though the world may be shifting and certain ways of life may be coming to an end, heinous crimes such as human trafficking will not. Learn more about the JLC’s work in human trafficking prevention here, and follow along with the JLC as we release further educational resources on human trafficking throughout the month.